Faizal Suhif’s elegant description of the inspiration behind the art in Microscopia, his solo virtual exhibition currently showing at Vallette Gallery, tells us that nature had much to do with it. In particular, his experience working the land in his village with his father had carved space to ponder the briefness of one’s time on Earth, while the cycle of sowing and reaping became a metaphor for life’s iterative journey to be a better person.

The departure point for me in the exhibition of prints and paintings was the arresting sight of “Sebesar Zarah.” The work of charcoal on canvas featured what looked like a large, moss-encrusted dinosaur egg half-submerged in water cosplaying as a glacier. The scale of the “egg” to the water that surrounded it made me think of large objects trying to fit into tight spaces. This playing about with scale, positioning the artist as someone who enlarges images for wider scrutiny, is an enduring theme in Microscopia. This is suggested by the exhibition’s name, but I would like to add another theme that Faizal’s art conveyed to me: nature and its interlay with archaeology and architecture.

After struggling briefly to master the click and pull of the navigation buttons on Kunstmatrix, the 3D exhibition platform through which I viewed the artworks, I found the individual works occupying the screen a sight to behold. I was drawn to the multiplicity, how you could be looking at one artwork and see different elements of the natural world, the built environment and things often hidden from view. In the example of “Ikan Dan Laut,” blink and you see a fish, in the style of a fossil. Blink again and two butterflies appear, wings clasped together. A third go unveils a cavernous entry to another world, perhaps another universe?

One of my favourite pieces was “Hidup Merumpun,” a triptych in black and white. Again, the images were large, grazing the edges of the panels. A mushroom with a conical cap looked like a prehistoric arrowhead. What looked like a large pinecone also seemed uncannily like a noni fruit, or a rendition of roofs from Angkor Wat or Bagan, Myanmar. Another panel bore the image of a knotted ginseng root – or maybe a bonsai tree? – but at deeper glance, it also resembled a nudibranch resting under the sea, or a drop of paint in water with tendrils unfurling as it is buoyed along.

If these works were inspired by things Faizal observed when working the land in his village, had he become a documenter of how nature permeates concrete manifestations such as iconic ruins or ancient weaponry? This was a delicious thought that kept me engaged with the exhibition. Perhaps most satisfying was the task of looking at the art, and simultaneously letting my eyes rest and setting my imagination free. In his excavating and etching of texture, Faizal sets us on a path akin to tiny creatures exploring a gargantuan world. What do we see, and how do variations in scale influence our visual perceptions?

Once on this trail of childlike exploration, there was hardly any stopping. Faizal’s works, understated in the sense that they do not deploy a full palette of colours, become inviting backgrounds but also beckoning scapes that draw us closer. Gloomy and foreboding, “Piece of Land” is a diptych that looks like it wouldn’t be out of place on the set of Game of Thrones or The Lord of The Rings, while “Hope I” and “Hope II” recall prehistoric drawings found on cave walls. Maybe the range of visual effects is the beauty of printmaking as an art form. Its tactile nature makes it feel very real and enveloping.

As much as Microscopia presents the vast potential of virtual exhibitions, it also demonstrates limitations inherent in the compression of space that the virtual dictates. Imagine the other images that could have been conjured when seeing the “Hidup Merumpun” triptych in actual size and from different distances. In the background of the ink on canvas work titled “Floating Land Series II,” there were rows of scribbled text that piqued my curiosity. Aided by the light and shadows of the gallery, perhaps what it says would be clearer to see. Perhaps.

In one corner, there were pictures of Faizal hunched over works in progress. One showed him tracing the patterns of rocks, like an archaeologist in his element but also reminiscent of a childhood game that involves tracing, on paper, the heads and tails of coins to reveal numbers and images of the Parliament building or objects of cultural significance. In casting his eye on the art that is above, around and below us, Faizal Suhif awakens what lies dormant, ushering us into journeys of joy and delight. 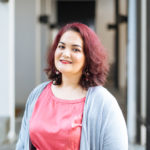